Interview with The Black Delta Movement 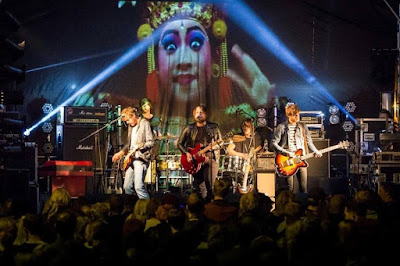 
What does 2017 have in store for the band and fans this year?

Well, we have a big European tour starting on the 10th March 2017, we’ll be coming through England, Scotland, France, Switzerland and Italy. With hopefully a few festivals. We’re also recording a new single in May. So a lot of great stuff to look forward to. Really excited to get things going.
Could you tell me a bit more about the new single?

We’re going to be releasing ‘King Mosquito’, which is a song we’ve been playing for a while now on tour. It’s a song that didn’t make it onto the last EP as we felt it was more of a stand alone single. We’re doing that and we’re trying to write some other songs to release as a B-side, you know, try and get some new music out there. The whole tone is quite garagey. I mean we took a lot of inspiration from The Sonics and The Stooges. It’s all in that vein.
Awesome, while we’re speaking of this, could you talk a bit about your approach to music as a band and as a songwriter yourself?

For me, I just listen to as much music as I possibly can. I collect records anyway, that’s where most of my money goes. Then we get to a rehearsal, a new idea either starts with a guitar part or a drum beat and we go from there. Since we have two drummers, it brings a new element to music and writing. When Joe joined the band, he really beefed out the sound with his work on polyrhythms etc. It starts really with seeing Thee Oh Sees and King Gizzard And the Lizard Wizard with their two full drum kits. So we have Joe on percussion, but if one day we play any bigger venues we might go on to play with two full kits. We’ll see what happens.


Is your first time playing in Europe or have you been abroad beforehand?

This tour will be our first time in mainland Europe. We did play two dates in Moscow, Russia in 2015. That was an incredible experience and we had toured in Ireland the week before that. This is our first time in France, Switzerland or Italy. We’re really excited! We’ve been trying for a few years actually, we have had a few opportunities but they’ve all fallen through for one reason of another. Now we’re just really excited and we want to keep this momentum moving.


So with that being said, what would you say is the biggest difference between playing abroad and playing in the UK?

I’m not really sure. Playing in Moscow was a different experience anyway as we didn’t have any of our own gear. We took pedals and we borrowed everything else from the promoter. It was surreal, the promoter said to us “Don’t bother with a sound check, there’s no point. Just come down at midnight and you’re on at two”. So, we turned up and we didn’t have a clue about the radio play or anything like that. The place was completely packed out. They were just ace, they were one of the most intense crowds we’ve ever had. From start to finish they were just brilliant. They were really going for it.

When you look at it from a certain standpoint, every city has a different feel to it. Like if we play in Hull, people tend to stand back away from the stage but if you play somewhere like Brighton, London or even Manchester, people there aren’t afraid to get close to the stage.It’s a strange one, I think it’s all subjective.


Yeah, that must have been weird, going to a foreign city and playing with foreign gear. Playing a show without knowing what sound you’re going to have. As most bands like having their own sound.

Well this was it really, we just completely winged it! We were really lucky because, Nash, the one who put us on, he had a 335 type guitar and a Les Paul type guitar as well. That just suited me and Dom. He also has a bass that Liam could just jump on. With regards to the amps we just made that up as we went along. With us, even though we can be very picky about our gear, we also have the ability just to rock up, plug in and play as well. It could be nice and loud as well and we could just really kick it. It was a surreal experience and we’re hoping to go back as soon as possible.


With that, what’s the worst experience you have had playing live?

We were playing Hull Trinity Festival and during the last song, as the band comes back in and we’re all ready to really hammer it home, I fell over and broke a rib. I really don’t know what hurt more, my rib or my pride [both laughing]! There were about 1000 people watching as well. I remember looking up and seeing a lot of friends in hysterics, just absolutely pissing themselves. The thing is we played another festival on that same night. I hadn’t realised that I was actually hurt. I woke up the next day and my whole left side was just black. Absolute agony. That was probably the worst.

What do you feel distinguishes The Black Delta Movement from other bands of the same genre?
That’s tough to say as we take a lot of influence from a lot of other bands. Sometimes we’re not sure if we’re taking influence or straight up ripping off. [Both Laugh]. Myself, I’m a big fan of Black Rebel Motorcycle Club, The Brian Jonestown Massacre and The Stooges so forth and so forth. So we just take a bit of everything in the line of music. The main thing we go for is just trying to make a big wall of sound. My friend and I went to see Gimmie Danger, The Stooges documentary and that has a part about how James Williamson work was just to fill every single frequency and that’s what we go for really when we make our music. We just want every frequency to make the biggest sound we possibly can. It’s more exciting when you see a band like that. When you can’t hear yourself think over the music, I generally think that’s a good gig..


You and both mate. [Both Laugh]. What what got you started in music and what made want to be in a band?

My Dad. I grew with my Dad playing all sorts. My earliest memory is him playing me “Revolver”. He has it on vinyl, well I say he has it, I have it now. Just this band called The Beatles and I thought “well, they don’t look like beatles” I was only only three at the time! A lot of my music taste comes from him. He took me to my first gig when I was eight years old, so I always wanted to be in bands. One day a bloke he knew, his daughter was starting a band and she had a guitarist. So, I went down and played with them for a couple of years. Then I got The Black Delta Movement started and we’ve been going for six years now. It’s all for the love of music and I’ve always thought, you know I want to do that. It’s my life, I work in a music venue as a DJ my whole world revolves around it.
Well, that’s what’s important I think. If you could go back to the start of it all and give your younger self some advice what would that be?

Learn to sing and get pedals sooner. It’s quite funny to watch back old videos of The BDM, you know, I thought we were shit. You know we were still trying to figure out where we fit in. I was only eighteen then, you know I was still finding my feet with music and sounds. Hindsight is always a beautiful thing really, I guess I’d do nothing different as I wouldn’t be where I am.


As a lifelong fan of music, what would be your dream gig to be a part of?

I would love to support the Black Rebel Motorcycle Club or the Brian Jonestown Massacre. I’d love that. My dream with the band is to stay small anyway. I’ve never wanted to headline Glastonbury or anything like that. I don’t want be huge, I’d love just to do academy sized venues and just enjoy it. I keep coming back to them but the Black Rebel Motorcycle Club do it just right. They go at the pace they want, the fans love and appreciate everything they do and they can always do the gigs they want. My end-game, as it were, is just to play the festivals and have that freedom to do what we want.
On the flipside of all that, as a fan, what’s the best gig you’ve attended?

Until recently the best three gigs that I’d been to were: Nick Cave and the Bad Seeds at the Manchester Apollo, Black Rebel Motorcycle Club at Brixton Academy and The Hives at Manchester Academy. However, last October I took my Mum to see Goat at Manchester Albert Hall and they’re just the most unbelievable live band. Nobody can come close to it, no one can imitate it. It’s just complete vibe all the way through. So I think I have to with Goat.


So now I will just end on this question. What is the hardest thing professionally that you’ve had to overcome and how did you overcome it?

We’ve always had ups and downs with the band. Like any band does. We’ve had arguments, we’ve had fights. When it comes down to it, you have to put your pride to the side really and just think about each other. We all have our own shit to go through but at the end of the day your band really does become your family. Learn by doing and just work together to make the best of everything. It’s great when you’re gigging or having a laugh but it’s not fun and games all of the time. It’s a massive emotional commitment. Even when we have changed line ups or whenever one of us has been having a shit time, we’re all there for each other. Just put your egos to the side and realise who you’re working with.