Album Review: Bash And Pop - Anything Can Happen 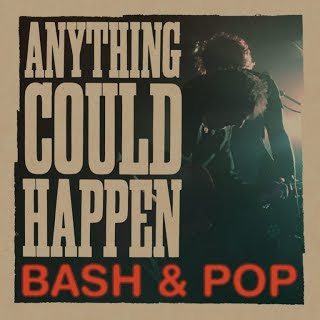 If you know me or my music taste you will know I have a particular affinity for the college rock scene from the US. One of my absolute favourite songwriters of all time is Tommy Stinson. The once bassist for The Replacements and Guns And Roses has had several music projects of his own over the years. One them being Bash & Pop. Until now the band had only one album to their name, Friday Night Is Killing Me. For me. For me, this is the most underrated albums of the early 90’s. Then again, I was on a 1 year old when that album came out, so I don’t know what the world was like back then, not really. Well, anyway I love this one now. So when I found out that Tommy was bring out a new album under the Bash & Pop name, I was ecstatic. The recent material that Tommy has been bringing out felt more like rock band material. Rather than the singer-songwriter type.

So, 24 years after Friday Night… What exactly has the new Bash & Pop brought to the table in 2017? Well a damn great record, that’s what! This is the album that I wanted to hear. With great rock riffs and an old style production the album gives you that retro feel with a modern twist. I have had a blast while this record is on and a big grin grows on my face. Right from the first tune. Tommy’s songwriting on this album ranges from wild and eccentric punk to mild rock styles. Tommy is a great front man, commanding a tonne of presence. The album has an infectious energy to it that makes you want to keep listening. Not a single song is a turnoff for me. I just keep this one blasting on my stereo.

The production is tight with hardly any dead spots throughout. So many of the tunes just grab you. Songs like Unfuck You and Breathing Room go for a more classic rock n roll style. With big sing-along choruses and simple song structures to lure you in. But the stuff like On The Rocks and Bad News serve more of a contemporary rock style. Catering more to a modern indie audience. The you have the soft ballads like Can't Be Bothered, Shortcut and Anytime Soon. These song hit just the right spot for emotional centrepieces. So there's a fairly nice range of material on the album. There's definitely something for any type of rock fanatic.

This was definitely worth the wait. Tommy Stinson is such an excellent songwriter. He’s surrounded himself with amazing talent to make this record. They have definitely produced something amazing with this one. Superb music and an album you should at least check out.