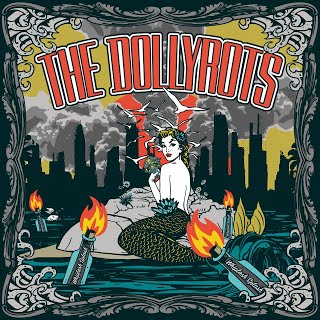 The Dollyrots quickly became one of my favourite bands last year when I saw them open for Bowling for Soup. They have that charisma and energy that I look for in a band. They're serious about their music although they don't take themselves all that seriously. They just seem like really cool people that enjoy making music. So basically a band that I can get along with really easy. They music is so bright and upbeat, it always manages to put a smile on my face.

The new album, Whiplash Splash is another addition to that line up. From the moment I put it on the album had me hooked on what they were selling. Another album of high energy and just fun songs that are instantly quotable. The choruses are catchy and suck you into the song. Seriously most of the hooks just stick in your head and take up brain space. There is a nice range of musical styles at play and the band pull them off seamlessly. The production on the album sounds great and the performance is tight. Every moment feels sharp and reaches you in the right way. The album just sounds wonderful.

The album ranges with it content. Some songs could be a really emotional roller coaster, like “City of Angels”. Some are just absolutely batty, like “Dance Like A Maniac”. It all works though. Because the delivery is spot on and Kelly’s very direct vocal styling fits every tone that the band tries to hit. I have found this album to be very enjoyable and no matter which song it is every time they play, I listen. I really appreciate everything that went into the production is a very small space of time. As the album was written and produced in just a little over a month. If you’re a fan of crazy happy punk music then don’t worry, The Dollyrots have your back.