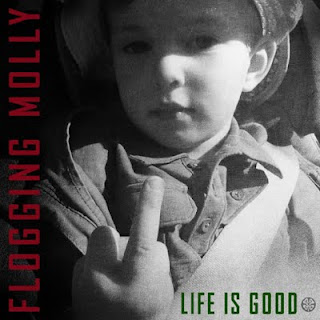 Flogging Molly could easily contend for my favourite band of all time. Every album they put out just increases in quality. Also, their songwriting has just gotten better. Ever since their album Float, they started to pull away from heavy punk elements and started to make more folk-rock music. I’ve felt that their music has really expanded. Of course they’ll never truly leave that sound but it’s always fun to see them branch out and play with other styles. When I heard they were working on new material 2 years ago and they played the new song at a show in Manchester I was really thrilled! That song was “The Guns of Jericho” and it was my first indication of where they were going with this album. Next up was the tune that came out last year “The Hand of John L Sullivan” which was more the Flogging Molly, older fans will be accustomed to. That folk-punk styling and that real fast pace bar band style music.

Life Is Good, is a really great album. Purely from a production standpoint the album sounds absolutely gorgeous. With every instrument crackling and popping right out of the record. All of the sound in nicely balanced with the gorgeous melodies shining through. Songs like “Welcome to Adamstown” and “Life Is Good” have these fantastic upbeat melodies that sound wonderful and catchy choruses that instantly get stuck in your head. I was immediately captivated by this album it hit me right in my heart. From the gorgeous folk instrument to the harsher punk rock elements. They always manage to capture the right emotions and ideas that every song demands. They manage to integrate that same energy and fun that they've always done. Yet, at the same time they use this to share some wisdom.

The lyrics are a powerful mix of emotional, political and feel good words. Shaken up together in this collection of songs that really feels like it has something to say. Flogging Molly have always been on the emotional spectrum. When it comes to their lyrical content. They bring so much passion in what they say. Songs on this album like “Reptiles (We Woke Up)” and “Crushed (Hostile Nations)” hold a special resonance. Even though they have generally upbeat rhythms, these songs really show their views on war and social issues. I also like how they don’t proclaim to know the answers like other political bands, they’re just say what the problems are. Even though they tackle some pretty heavy issues here they definitely present it in a way we can still have fun to it. It’s bar band music, but it’s very good bar band music.

I continue to champion Flogging Molly as a band. They make a lot of sense with their lyrics and they create massive hooks that are easy to sing along to. The combination of great music and well thought out songwriting with the personality and energy that band possesses is awesome. They always come across as very genuine and very likeable. I’ve always enjoyed their music and always look forward to anything they put out and Life is Good certainly ranks up there as one of the better albums this year.