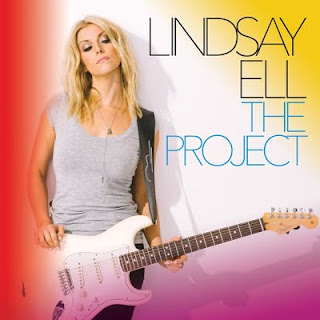 I first became aware of Lindsay Ell last year after talk about up and coming artists with a friend. When I looked up her music I really liked what I heard. She had this really appealing pop-rock sound with a little be of a country twang. I’ve always like big sounding pop country tunes that mix in element of other genres. After being on the road with the likes of The Band Perry, Brad Paisley, Luke Bryan and Keith Urban. Also, releasing a few small albums and singles. Lindsay has now made this album The Project. Which is in her own words this album is just that, a Project. It’s a blank canvas where she could hone her craft of being a songwriter. As well as really displays her capabilities as a singer and a guitarist. I think she did it really well.

From a musical and production standpoint this album, like all her work up to now, is excellent. As always, Lindsay nails the music with a calm and collected subtlety. Her groove is excellent and when she breaks into a guitar solo it sound really nice. I love the way each track just melds into the next. She has a really good ear for melody and riffs and makes them work all the time. Every track is well balanced. Her vocals and guitar work shining through impressively. All the songs flow nicely and it doesn’t feel like a single moment of the record is wasted, in terms of the sound. There isn’t an instance on the album where I’m not sucked in by the music. It’s bright and pack a lot of emotion in even without the lyrics.

Speaking of the lyrics. That’s where I feel this album could have been better. Certain songs are weighed down with some pretty clumsily written words. The mention of the actress Jessica Biel is a little on the nose in the song ‘Champagne’. I don’t know I think it just instantly dates the song when you mention something so specific to modern pop culture. I like music that feels timeless and this took me out of it. Also the phrasing in songs like ‘Mint’ and ‘Good’ just feel sloppy and don’t fit. It’s like there was no other word she could think of and those lyric wear out really fast. Now I don’t want you to think that I hate those songs. I don’t, I just feel the lyrics were poorly written and could have been refined a little bit more. In all honesty the melodies and tight musicianship draws me right back in. It’s just something I noticed. There are some lyrics that I really like. I love the poetic imagery in ‘Castle’ and I think those lines fit the mood of the tune.

All in all, I like this album. It’s fun record with a lot to like. I like the bright poppy nature of it as well as the more rock like elements. Lindsay is talented singer and guitarist with a lot of flair and style. She also has some subtlety to her performance. Not everything is about how amazing she is at guitar. She actually takes the time to let the songs breathe and that’s what really strong about the album. One well worth checking out.