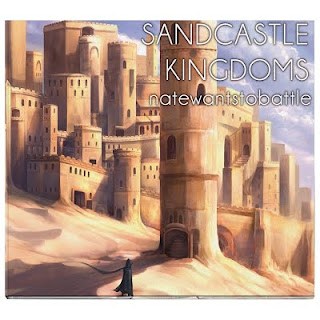 This album has been in my head for a while. If you’re not aware of who he is Nathan Sharp, a.k.a. NateWantsToBattle, is a YouTube artist who has been around for awhile now. I first got into his channel a few years ago with his Pokemon parodies of pop songs. Also, his cover of “City Escape” from Sonic Adventure 2. He has a few types of tunes he makes for the channel. Usually either songs about video games and their lore. Or taking the context of the games and applying it to pop and pop-rock songs. He also does straight up cover versions of tune pop-punk songs. So, when I heard he was coming with an album of material completely comprised of original writing. With no lyrics referring to video games, or pop-culture, I had to go check it out.

Sandcastle Kingdoms is a pretty decent sounding album. It filled with big sound, well put together riffs, and catchy hooks. I have to say, I like how a lot of the songs flow. Right from the first song “Branded”. Nate makes creative use of the guitar work, and the big sounding chorus works. It grabs your attention for the rest of the album. Yet, it’s a song that I tend skip to get as it lacks the energy of the upcoming songs. The album really gets going with second song “StopRewind”. This tune has way more energy and the lyrics are connectable. Being a song about not wasting time reminiscing and moving forward. These themes of living in the moment, moving forward and having confidence in yourself continue through with the singles. “Live Long Enough To Become the Hero” and “To The Ends of the Earth”. I love the way the album keeps up this energy and the choruses do just build. The passion in Nate’s voice is fantastic and you really feel for his plight in the song.

As much as I would love to go through every song one by one. I actually want talk about how this fits together as an album. When we put this together this album seems to be about having some form of existential crisis. With the songs assessing life and the facets there of. Such as working hard, how we perceive ourselves and love. Also, if you take the lyrics of “Perfect by Design”. You could even say he’s looking at how we live our lives in general and we strive for more. Also that song features the great the vocal work of Amanda Lee (a.k.a AmaLee). I have to say it goes quite deep. For a guy who usually sings about the Pokemon, Zelda and Five Nights At Freddy’s franchises. It kinda took me off guard. It’s weird when a singer who usually plays his music for comedy is now asking for seriousness. But hell, I’ll oblige. It’s great.

Yes, this is an album well worth getting. I think this is fantastic. From the great production to the stellar songwriting. Nate is one of these people may be willing to write off as he hasn’t come to prominence the usual way. You know by touring constantly, slowly struggling with money issues. Like other upcoming artists. He instead has found fame on YouTube and co opted that into music success. I can respect that, it’s not the usual way bands that I find come to fame. Sandcastle Kingdoms is a fun engaging album that I have not been able to stop listening to. Definitely worth checking out.