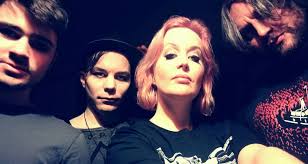 This was an interesting experience. Not just interviewing a band after their set, rather than beforehand, but also for the interview to be the last thing I do on the day of a festival and so late on the Saturday of SOS Festival. I was able to catch up with Olivia and Nikki from Bad Pollyanna for a chat. Talking about playing the acoustic stage, their writing and overall prowess as a band, as well as their favourite places to play live. I will stress this is less of a “professional interview” and more of a chat with one of my favourite bands. So I took the relevant parts of the conversation we had and and turned it into what you see below.


Mick: You’ve just played the acoustic stage at SOS festival, which must have been a departure from your usual stage show antics. How did it feel to strip those songs down?

Nikki: Interesting way of putting it. Yeah, we were really frightened actually, I mean, we’ve done little tiny acoustic sets like in pubs and that. But this was a whole different thing.

Olivia: We were glad to have that fear back though, because it’s been ages since we were afraid to do a show. You know we do what we do and we’ve done it hundreds, if not thousands of times by now. You know we love performing but it’s been a lot time since we’ve had the fear. It was actually quite nice to think “oh my god, I’m actually nervous”.

Nikki: Thoughts going through my head were along the lines of “Oh no! We might die up here, they might start throwing things at us.” “Is that guy carving a spear out of a chair?!”


Mick: I felt it was really interesting to hear some of those songs just pulled back. Are there any other songs you wish you could have, or might do, in this style?

Olivia: Actually we did do a version of Broken Toys, with like just piano and a double bass type of sound. It’s sound weird, like a distorted twisted type of sound.

Nikki: Yeah, we’ve recorded it and thinking about putting it up on YouTube.


Mick: Cool so kinda like the acoustic version of “The Diary of Jane” by Breaking Benjamin with that sort of haunting sound.

Nikki: I think that’s the sound we wanted.

Olivia: Definitely. We actually wanted to bring a piano here today but we thought we should just keep it simple. I think just doing a full acoustic set we horrifying enough.

Nikki: I think we’d like to do a proper full acoustic headline show at some point in the near future.

Olivia: I think we’ve done something like that already, that special show and it was amazing, one of the best nights of life. I think we should do another one. Maybe at Christmas or something?

Olivia: We’d just get lost in creativity. Like we’ve done a swing version of ‘Define Me’ with double bass and it sounds great.


Mick: You’ve said that this was a good show for you. What would be the best show that you’ve done.

Olivia: I would say the show we did in that church in Leeds for S.O.P.H.I.E.. That was really good. Also, our hometown shows in Huddersfield are always awesome.

Nikki: Hometown shows at The Parish in Huddersfield. The Parish is a favourite venue of ours.
Olivia: In all honesty though it’s never about the size of the crowd it’s about the feel of the crowd. For instance we played Corporation in Sheffield, and we were supporting this hip-hop/rap thing and it really wasn’t our scene and the crowd felt dead all the way through. Then you can play shows with only 50-100 people and it feels great when everyone is into it. Those are the best, just when everyone is into it and having fun.


Mick: Going from that would you prefer -to play bigger and grander shows or smaller, more intense show?

Nikki: Although I like the smaller gigs, where I can literally pick out half of the crowd by name. I guess it’s great having a bigger stage because we make such big ass songs.

Olivia: We make huge songs. I keep saying that we have to stop writing closing songs. Like, My Incubi, Hollow, Broken Toys, Out of My Mind… I could go on but all of our songs a brilliant closing songs and I think we need to start thinking about the rest of the set. [All laugh]


Mick: Yeah, you need to start making setlist filler tunes. In all seriousness, how do you approach writing and making you big tunes?
Olivia: Generally, It’s either me coming up with a melody or some lyrics and I take it to Nikki. Or Nikki will write out some chords or an arrangement and we build it from there. We did at one point experiment with writing from a different point each time to avoid being too formulaic. Like some songs will start purely from an acoustic guitar, or a piano idea comes first. I know we wrote Monstrous Child from a rhythm, drumming point of view.

Nikki: We have a lot of different ideas and then we try to put them in perspective of an album. It’s a little bit scatter brain and we do take shots in the dark when it comes to writing. We start putting stuff down and throwing stuff out there and hopefully we’ll find a place for it, it all feels a little random. I know that sometimes we feel really confident in what we’re doing as songwriters and sometimes it’s completely off the cuff.

Olivia: And sometime you know we just have to kill our babies (babies being their songs). It just has to be done. We have created some stinky babies and we, you know, we’ve had to kill them. Stab the right through the face.


Mick: That is honestly the best way anyone has ever described the failures of their songwriting. [laughing]. Speaking of songwriting what is the one song that you wish you could have written as a band?

Olivia: Couldn’t pick just one! Probably, ‘Closer’ By Nine Inch Nails. That’s one of my absolute favourite songs. ‘Lazarus’ by Stephen Wilson, that would be another good shout. For a showpiece I would to have done ‘American Woman’.

Nikki: I just think of bands like Royal Blood and you look at their songs and I think, “I know I’ve written that riff and thought it was terrible. Damn I wish I hadn’t thrown that away”. You get that feeling of, that’s really obvious, why haven't I done that, it make so much sense!


Mick: Just to close with now. What's the hardest thing you've had to overcome and how did you overcome it?

Nikki: Probably trying to work two jobs while trying to make an album. That’s pretty tough. It’s sort of a baptism of fire in a way. You can do things you love when everything is up against you, you come out tougher on the other side.