Interview with Kelly Ogden of The Dollyrots 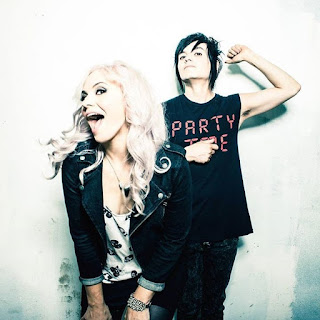 With the new album Whiplash Splash coming out really soon. I had the chance to sit with Kelly Ogden from The Dollyrots. We talk out production and funding of the new album, performing live and generally have a good old laugh.


The new album Whiplash Splash is out very soon. Yet again, you have made it through the crowdfunding campaign site, Pledge Music. How important is that service for you as a band?

It’s been beneficial in a number of ways. The first being that we have grown our relationship with our fans. Just because we connect directly to them, through that all of the time. You know, band to fan with nothing in the middle. No suits, no record label, no nothing. It also makes more financial sense for established bands to do it this way. Because you work on the product, the fans pre-order it and then when all is said and done you actually own you music. Which if you work with a record label, that’s not what happens. Also, with the whole pre-order thing. People have actually bought the album before anything is actually written. So we kinda feel like we have to make it really good, so no one feels disappointed. So it lights a fire under us.


With that being said, what do you feel is different about the new album? What will fans find fresh on it?

I think it’s a lot like Barefoot and Pregnant or Eat My Heart Out in the delivery. We had to make it really quickly. We started making the album and six weeks later it was finished. That’s first notes to recording to done. Our situation at the time was like this. We had a three year old and I was about seven months pregnant when we got to the writing part. So you can imagine, our life was, and still is pretty hectic. We’re a full time band on top of being full time parents. So the way we recorded this album went like this. Typically Lewis (Cabezas, Guitarist) would stay up all night, working on instrumental parts. Which was program drums and guitar. Then I would wake up the next day and we would trade off working on it. We did a whole bunch of songs, like 20 of them, that way and then sent them to John (Fields, Producer) in Minneapolis. He, at that point, put them together and added extra bits like keyboard parts. You know, we didn’t have time to second guess ourselves. We just went with our first instinct. We weren’t worried about be overproduced. We don’t want to restrict ourselves to just the barebones in the studio.


How difficult is it to write and record new songs without feeling like you’re getting stale?

I think it’s a weird thing. We joke, that all bands use their best material on the first album. You spend you’re whole life making your first record. Then you go “awe crap we’re actually a band now, we have to do this every couple of years”. Our songs used to be very calculated, thought out and rewritten. However there’s a point where it’s becomes more second nature to make a song and it just flows out. We’re lucky because when that happens it comes from somewhere that’s not necessarily us. You know, sometimes we’ll make a song and we won’t have a clue where it came from. To the point where we’re not sure what the song is even about [both laugh]. I don’t know. Yet, it’s not like we’re on autopilot because it’s still really hard work, but it’s more of a free feeling now.


Well now, last question about the new album. What’s your favourite song on it?

I really like City of Angels. We wrote that about the neighbourhood, in Los Angeles, where we live. It reminds me of how much we’ve gone through together as partners in life and as a band. So that one hits a sweet spot. I also love Dance Like A Maniac it’s a crazy and fun. Pack of Smokes as well, awe damn I’m so bad at this game! I love them all! [Both laughing]


That’s fine… Moving on. What’s the one band that you haven’t toured with, that you would like to?

Green Day. If I had to pick one, that would be it.


Fair enough, sounds good to me. I’m sure the fans would like that. Ok, who do you feel are the most underrated bands?

There are so many young bands out there that we like. Our drummer, Rikki is in a band with her and a guitarist called The Two Tens. They’re coming out with us on our US tour. Then there’s bands like Dog Party & Skating Polly. Those would be my tops.


If we perfected time travel to a point where we could do it without affecting the space-time continuum. What would you tell your younger self?
Oh, I love this! To try not to worry and just have fun. I was always such a worried kid. I would say, “Your trajectory is not predetermined. There’s only so much you can do and it’s just all about the ride.” [Kelly laughs]. Also “To really try to live in the moment without being completely stupid.”


What’s the biggest difference between the UK and US for playing shows?

It’s a lot easier to tell if people like you or not in the UK. When you look out at a crowd in the UK their clapping, singing and are generally more engaged. It’s a little less reserved. Whereas in the states people are so concerned with looking stupid. Half the time they’re just filming on their phones. That’s so frustrating. I’m going to tell you something that people, who go to gigs, may not know… When we’re on stage, we can see everybody, you know there’s not a wall there. We can see if they’re on their phone or drinking their drink. We can see it all that and sometimes we’ll see people like, picking their nose. I just think “god, I’m going to miss a word because I’m trying not to laugh”. I think it’s because they think that we can’t see them or something, it’s so weird. [Both laughing hysterically]. I guess it’s more fun in the UK.

Well, we’re certainly not ashamed of being weird over here. We’re all idiots in one way or another [laughing continuing]. OK, moving right on. As a fan of rock music, would be the best show you’ve been to as a fan?

My favourite all time show, was… Awe I can’t remember what year it was, but it was at SXSW music festival. 2006 or 2007. Against Me played in this tiny little dive bar. It was probably about 120 degrees in their. Everyone was covered in sweat, it was the end of the night and everyone was drunk. It felt like I went to planet rock and I didn’t come down for days. It was an unreal rock n roll night.


Taking from that, do you use those shows to improve your own live performances?

Absolutely. A lot of the time I go to a show and for me it’s more of a “what not to do” situation. I think for me, when I’m on stage I’m really bad at performing. I hate musical theatre, I did not do drama, also I’m a really bashful and awkward person. So, when I play music on stage I just try to get the songs right and try to be funny, maybe a little self- deprecating. When I watch other people, I look for how their confidence comes out and how they can be themselves. The things that don’t suit our band are things like choreographed dancing and the show-offy, jumpy stuff. I feel like, as much as an audience enjoys that, I can’t do. I’ve tried to pretend to do it and it just feels so false. It just doesn’t work.

That’s tough, hmm. [Kelly starts thinking and goes quiet]. Damn! I think you’re going to stump me. Alright this is kinda dorky but I really don’t care. That Jimmy Eat World song... I can’t remember what it’s called… Here I’ll look it up [Kelly looks up the song on the internet] The Middle. I should have written that song.


To end on. What is the hardest thing you have had to overcome and how did you overcome it?

Probably being very self-conscious. It think that I still struggle with the fact that people are often staring at me or listening to me. I never planned on singing and being in a band. So, it’s really kind of ironic that that I ended up doing this. It’s kinda the “fake it ‘till you make it” attitude that makes it look like I have any confidence. I think I’m still faking it a lot of the time but I’m having fun faking it at the minute. I think the lack of self confidence is definitely the hardest thing for me at the moment.