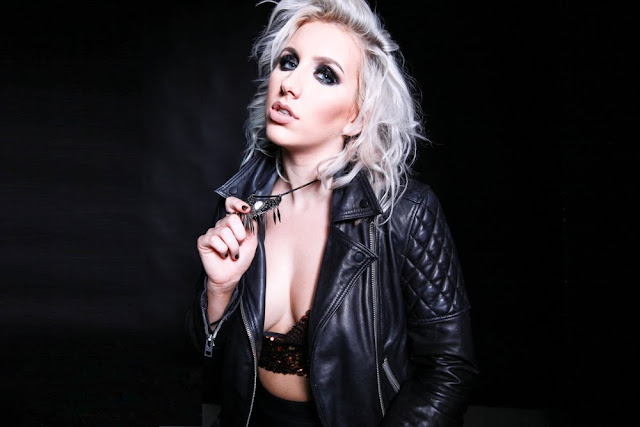 The best feeling in the world is discovering an artist that just speaks to you in a whole new way. I listen to a lot of new things all of the time and when I found out about Sally Caitlin (Now known as CAii), I was immediately captivated by her voice and her music sounds really nice. She has been writing music since she was 15 and has just gotten better with time. She takes her influences and molds the sound to fit her style. With every song you can truly feel the passion that she presents as she uses her music to tell her stories of drama and angst. I’ve been listening to her music a lot lately and had the chance to speak with her when she performed live at the Fac251 in Manchester.


Could you tell us a bit about your music and how it all comes together?

I would say the genre is electronic-pop and I write all of my own songs. I tend to write about my own experiences. The songs I make are always about me and any sort of drama in my life, and if there is no drama I try and make some so I have something to write about.


So you make something up or do you actually make drama happen in your life?

I was talking to my friend and they said that I’m a method songwriter. So there has to be something going on in my life, some sort of drama or pain for me to write. However it tends to be more anger than an upset feeling. I find that I write my best stuff from a place of rage. It always ends up sounding good.


How does your music go from those feelings of drama and anger to being a finished song?
A lot of the time, I’ll write at my piano, that’s where I usually come up with the concept. I’ll work out the chords and the melody there and usually I work with producers to come up with the full version of the song. However, on the last track, I actually produced it myself and moving forward I would like to continue producing by myself. It’s usually a case of getting a bassline down or some drums and getting a feel for where the song is going. Sometimes it’s good to have a reference track, so you can get a feel for how you want the song to end up.


So how was the transition of having someone else produce your music to you producing your own music?

It was quite smooth transition as I was getting more involved in the production process anyway. So I would come in with an almost finished product on Garageband or I would have super specific ideas of how I wanted the music to sound , you know “I want this bassline here” or “I want the beat to go like this”. As I grew in confidence as a songwriter, I started to get more ideas for production so it felt like a natural step for me to produce something myself.


Is this the way you think your career is going perhaps? With you writing and producing?

I hope so. I mean the ultimate aim for me is to get signed to a major label. However with that comes less control over the production. Yet, the dream is to keep as much creative control as possible. I would never sing someone else’s songs or let anyone talk me into doing something I wouldn’t want to do. I also would let anyone else take my songs, because that’s happened before and it doesn’t feel good.


Fair enough, I can totally understand that. Moving on, when would you say that passion to create music first started?

Oh man, I always wanted to be a singer but I was always so scared of getting on stage. I used to do this thing. I’d get on stage, sing one line and then run away. So I decided I had to get over that bit first. So yeah, it’s always been in me. In fact I wish I had have waited a little longer to release my first song.


So that would be the one thing you could go back and tell yourself what to do better?

Looking back, there’s a million things I’d tell myself not to do or to do differently. I wish I had started gigging so much sooner because I used to hate gigging and I used to love the studio and now that’s flipped around. I like the studio but sometimes it can feel like I’m putting a lot of pressure on myself to get it right on the day and it can really burn me out. However, gigging right now gives me so much more freedom and it’s where it feels like everything makes so much more sense. It’s where it feels like it all pays off. You know the music industry for a small artist is just so difficult, so you have to have those moments that make the difficulties worth it and playing live is that for me.


Do you ever feel like the songs come out differently when you play live as opposed to the studio?

Yeah absolutely. I gig with a range of set ups, so it’s always an experiment. In fact, tonight is the first time I’ve ever had this set up, with a live drummer and backing tracks. Also the drum set is a hybrid style, with half acoustic drums and half electric so it all feels new and fresh. Also, I think when playing my songs live, I sing them differently. Take ‘Solo’ which is the song I end on, it’s a good closer for me personally. When I listen to the studio version I think “Yeh, that’s an ok track” but when I play it live I think I give it that little extra sass and it comes out better, I just want to do a mic drop at the end of it.


Since you like to play around with your setup. If you could do anything right now with your live set up, that you may not have the money for or don’t have the experience with, what would you do differently?

Now that I’ve played with a live drummer, I love it, so I would want to keep that. Anything I do with my live set up would just be to give my music that bit more bite. I currently work with a guitarist and we both have a 3 track loop station, where we loop vocals, guitars and he has a pedal that turns his guitar into a bass. So in the future I would like to move towards a proper full band set up and maybe the ability to loop vocals at the start. I have to admit I love a good loop. Like people just think that you loop guitars but we do vocals, bass and so on. It just creates so many layers to the music and it sounds great too. However it does take a while to build up that loop so I think it would be cool to incorporate a full band and a loop station.


In the future, who would you like to collaborate and/or duet with?

Such a difficult one because anytime people ask who am I most inspired by it’s always Banks. She’s just my absolute favourite. However I wouldn’t want to duet with her as I’d be afraid of people comparing me to her and also I don’t think our voices would mesh. I don’t think two women dueting really works. To have that real contrast I think a man and a woman usually works best. So taking that into account, I would love to work with John Mayer because he was my first ever real songwriting inspiration.


Like you said before, your music is very electronic based pop music. Would you ever do a stripped back session sort of thing?

I love doing acoustic sessions. I’ve got acoustic versions of my songs on the backburner. I might be putting them on the upcoming release schedule. It’s how I started off writing so I would definitely do that, however, it’s not the direction I would like to take my music going forward. It would only be a special feature, once in a while type of deal.

So to end. What’s the hardest thing you’ve had to overcome and how did you overcome it?

There’s a couple of things. The stage fright was something huge to overcome. You know you can’t anywhere in music unless you’re willing to perform the songs. So that was massive. Apart from that. I have really struggled with depression and anxiety in my first year of university. That was when I gave up music to focus on my degree in chemistry. You know I had planned to go the right way, you know, instead of doing music. When I did though, it made me so miserable. Mental health problems were just something that no one used to talk about but now it’s becoming more in view and people are opening up more. A lot of my songs come from that struggle, I mean not from a completely depressed point, but I do have a tendency to go a bit dark. I have really dark days sometimes, so I decide to channel that into my music. Music helped me overcome that.