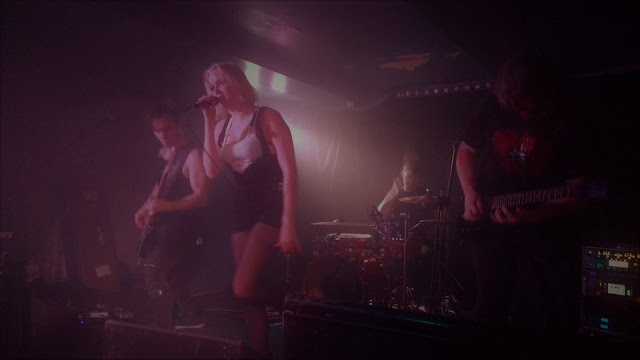 It’s been a long time since I’ve seen Bad Pollyanna, in a full electric set. I am a huge fan of them for a long time and I absolutely love their music. I managed to catch their acoustic set at SOS Festival this year and it was really good but I did say that I was waiting for them to be back with a full electric set, and boy did I get it! They rocked up to the Factory 251 and completely blew me away, as they’ve done before. They also brought Manchester local’s Her Animal Side and Argentinian/Mancunian rockers Fear Me December.


These guys weren’t bad. They played a completely serviceable set. With roaring guitars and an intense punk like rhythm section and it created a ferocious tone. The sound was pretty decent although the lead guitar sounds completely bled out, as the bass and distortion masked its sound a little, although I blame the venue for that more than the band. Also their stage presence left something to be desired, they felt a little reserved and didn’t feel like they were giving it their all. I’ve heard a saying “play every show like you’re playing to the biggest crowd possible” and that’s what they need to do, really go for broke and let the personalities really come across on the stage. Their songs are good and they felt well gelled as a band, the rhythm was tight, but a bit more in the sound so the guitar feel bigger and a bit of work on the stage presence and showmanship, they will be well on their way to being a great live act.

Now, I reviewed their album last year and I have to say it left a lot to be desired. Although there were some catchy tunes, the production wasn’t great. I thought there was some kind of effect on the vocals and after seeing them live I can tell why. I don’t want to sound mean, and I don’t want you to think I’m picking on them. However, the vocals on this night were not great. She couldn’t hold a note properly and her voice seemed to either fade out or crackle when she tried. She just didn’t have the power in her voice. It just let the whole set down. The instrumentation was great and they have some really interesting songs, in terms of the grooves and riffs. Yet, the vocals were just not great. They were entertaining enough crafting some banter between songs and they looked like they were having a lot of fun. She just needs to work on her vocal delivery. Some good news on that front is that when it came to the key change during the song “When This is Over” her voice sounded better, so maybe they just been writing in the wrong key for her voice. They have a lot of work to do, but hopefully they can push forward and make themselves even better.

It was finally time for the headliners, Bad Pollyanna. They blasted on to the stage with a real energy to the tune Bionic Heart. The added synth and electronic noise added so much to the atmosphere of the set. Their music filled the room and the band roared into life. The night really flew by as they played their best tunes as the crowd rocked out. Although relatively short the set was alive with charisma and Bad Pollyanna hit all of their notable tunes like Awake Now, Define Me and Monstrous Child. I have to say I like the shorter set. It was concise and to the point, none of the set felt like filler. Making the night flow much better. So on that front it was a really great night. The band were intense and oozed with stage presence. In particularly front-woman, Olivia Hyde who is the embodiment of stage charisma. I have to admit anytime I see these guys perform I always get wrapped up in the tunes.


I have only one problem with the set really. It didn’t stop my enjoyment at all, but the sound was too heavy on the bass and distortion at times. It was really noticeable when it came to the guitar solos or just the more intricate parts. As I mentioned earlier, the notes just bled out into the noise and the bass completely overran it. It was a little annoying and I wish those sounds came across with a much bigger tone. However when the guitar did come in with the big chords it sounded a lot better. The sound had been on and off all night, for me at least. Other than that, I couldn’t think of anything wrong with the set.


Overall, this was a fun night. Although the supports left a lot to be desired, Bad Pollyanna more than made up for it. They’re one of those bands that could stand there and read the phone book and it would be entertaining. It was more than worth it to come out to Manchester to see them and I would highly recommend checking them out if you ever get the chance. With the promise of more shows and new music to come, I genuinely can’t wait.