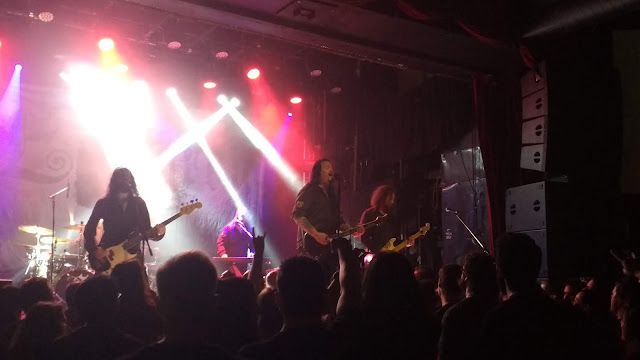 Going into this gig was a bit of a weird experience. I really didn’t know any of the bands playing but hey, I was only in Canada for a week so I thought I’d check out a gig while I was in Toronto. The only band I was aware of was Need, as I reviewed their latest album “Hegaiamas: A Song for Freedom” earlier this year. I did look up a bit of Evergrey’s music and I really like their music, I also listened to some Seven Kingdoms on spotify on the flight over. So it was fair to
say I was really looking forward to this night. It was definitely a highlight of my trip to Canada.

This was a great chance to see what the metal scene in Canada was like and I was not disappointed. The fans were rearing to go, the atmosphere was truly excellent. The Mod Club Theatre itself was a really nice place with a great set up. The acoustics were pretty damn nice and the sound system sound really damn nice for the whole night. Every band brought their A game and it was a really nice mix of sounds for the night with every band bringing something new to the table.

A blast of guitars and synth marked the arrival of the hometown band, Ascendia. I was completely struck right away from the power of frontman, Nick Sakal’s vocal performance. I mean this guy has one hell of a set of pipes. The music was performed well too. Although the guitars felt a little thin, I could have really done with a bit more power to their set. Not a moment was wasted and the Toronto crowd really gave these guys the respect and enthusiasm they had earned. I also really enjoyed their cover of the legendary tune “Holy Diver” by Dio. They were a great opener with a lot to offer and I will be checking out more of their stuff.

Even though this was the only band I was really aware of, I really was not ready for this set. The Greek prog rockers, Need, hit the stage with grace and atmosphere. I think the crowd were really taken back by their unique style of music. Their set was filled with pomp and pageantry with the complex style really being shown off. I will admit that it sounds a little better on the albums, but damn this was one hell of a statement. To play that well is awesome. Pulling off these songs live can’t be easy and credit where it’s due they nailed the show. It was really comforting after the show was done that they had found an audience. The complex nature of their songs makes it difficult for them to translate in a live setting. However, it was awesome to listen to. These guys have just been getting better for me and have certainly been the discovery of the year so far to me!

Next up, the American power brutes, Seven Kingdoms, took the stage by force and…. Oh my, what a reaction. Their set was high octane and hard hitting with singer, Sabrina Valentine, hitting every notes in spectacular fashion. The pace of the set was set to blast and there was no slowing them just hitting song after song, it was truly breath-taking. It’s fair to say I became a fan of them on the spot. The set was so damn tight, the band was like a well-oiled machine just churning out metal tune after metal tune. The only problem I had with them is that they went on a little long. I don’t blame the band for this but I feel an hour long support set is just a little long. The night was already a little clustered. It just meant that a lot of the crowd were nearly spent when it came time for the headliners. If they had of shaved 15 minutes off of the set it would have made the night a little more palatable. Nothing wrong with the band just the booking was a little off. But hey maybe that’s just me.

It was finally time for the big guns. The Swedish prog-metallers, Evergrey. This was absolutely epic. Everything from the setlist, to their presentation to the sheer scale of the sound. They are simply one of the best bands to see perform. I’ll admit I’ve never really given them a fair shake, aside from the odd album here and there, but damn if they didn’t impress me. Their sound just completely filled the Mod Club Theatre and the crowd were really into it. Every moment just added to the atmosphere. I will admit I got really giddy when they played the 2 songs that I actually knew, “Distance” and “Passing Through”. Also, the tune “In Orbit” went down really well. They just made every second of the night feel really special. Vocalist, Tom Englund, had such a commanding presence and his voice was incredible to hear. Henrik Danhage’s guitar work was simply superb and was really enjoyable.

Genuinely this was an incredible night. Every band was on top form and really showed the crowd what they were about. I loved going to a foreign country and going to a gig. I discovered some great talent and I will not forget it anytime soon. What a night!