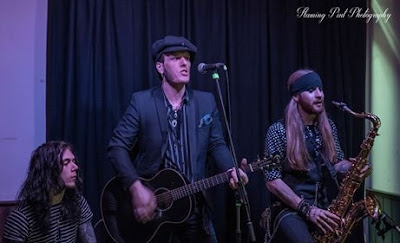 On a dreary and wet Saturday night in Manchester, I headed to Gulliver’s in Manchester Northern Quarter for an acoustic night of rock n roll. I have seen Matty James Cassidy a few times in the past and I have been a fan of his for a while. He makes some of the slickest sounding music I’ve heard. Being a fan of old school rock, blues and country he definitely hits all the right buttons when it comes to my music taste. I am also a big fan of acoustic jam nights. There just something so honest and pure when music is played this way. Also on this night we were treated to Golden Daggers and there was also mention of a special secret guest, who turned out to be Manchester rockers Gorilla Riot. With the room music room filled and the atmosphere electric the night began.

I was immediately taken back by Golden Daggers. Their music was this wonderful blend of smooth rock and grass-roots style folk with a bluesy tinge to the tunes. It was the kind of music that really chills you out and the melodies were simple and catchy making them easy to listen to and enjoy. The instrumentation was clear and well produced and it was all evened out working like a well-oiled machine producing fun and intricate tunes. Frontman, Matt Wolfe had plenty of stage presence and charisma and when he busted out his harmonica, it put me even more in mind of the old school blues. The crowd were fairly responsive to them and it made for a pleasant atmosphere to be in. Since the evening felt loose and fun, it felt like the band had less pressure on them and they were letting loose a little. This just made for a better show. I was definitely engaged and engrossed in their set and I hope to hear more from them in the future. They were an excellent opener for sure.

Next up on the stage were the “secret” guest of the evening, Gorilla Riot. I’ve not seen them live for a while. So yeah, this was a treat. Their riff based rock music was a delight to listen to in this setting with people singing along and having fun in general. They have a real charm to them and they look so at home on the stage. Their riffs were great and their flow was tight. Their set was a whirlwind of stripped back rock n roll tunes. Trust me, they held absolutely nothing back. Just because they were on acoustic guitars did not mean they had to change how they played, they still delivered all of their blistering guitar solos and energetic riffs. I think everyone in the room was blown away by their musicianship and performance ability. I was also impressed by how they took command of the stage and how their music filled the room. It was pure magic and another example of how the acoustic format shows off a band’s music. It was a truly brilliant set and a lovely surprise for the night. It really goes to show you don’t know what will happen at a gig so you might as well get out there.

After a bit of a break we got to the main event of the night, Matty James Cassidy. The stage looked bare following the other two acts. Simply set up with Guitar, Saxophone and a drum box, which in all honesty is all you need. It did its job at the end of the day. It was much different that the last time I saw him with his full band. With the simple set up coupled with the intimate setting it was a really bright and fun set for such a dreary night in Manchester. The music sounded great with Matty’s bellowing voice matching perfectly to the songs. The saxophone was a really nice touch to the evening; it contrasted off of the guitar really nicely giving the songs a real bluesy vibe to them. Matty’s personality shone in this smaller venue cracking jokes with the crowd and sending them home happy. He played a really great cover or Johnny Cash’s “Ring of Fire” which got the crowd going and a great rendition of his song “Gunpowder” linked in well since it was the weekend of bonfire night. My only regret of the night is that I had to go early, because of public transport; if it hadn’t been for that I would have definitely stayed of the entire show. It’s all a roll of the dice at the end of the day.

This was a superb set and I had so much fun. Both support acts were more than worth the trip out and Matty is still one of my favourite artists working the live scene today. If you have the chance I would highly recommend checking out all of them. If they’re playing near you anytime soon go along and check them out.