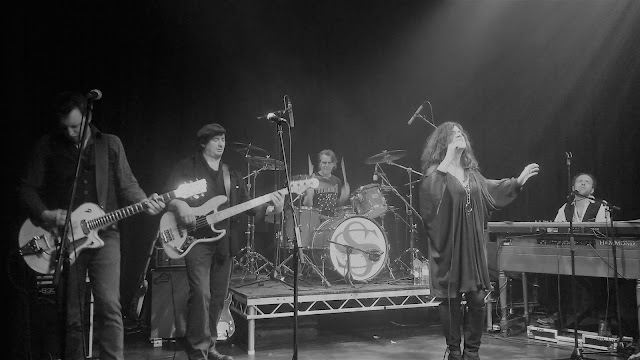 
I will admit, it’s really nice to see such a high profile name come to my neck of the woods. The Citadel in St Helens welcomes the odd nice surprise and it’s a great venue to deliver talent like this. It’s big enough to make the sound feel huge, yet small enough to make a night feel special and intimate. It’s a nice night out to say the least. On a cold night, St Helens welcomed American blues singer, Sari Schorr and her backing band (Ash Wilson on Guitar, Matt Beable on Bass, Roy Martin on Drums and Bob Fridzema on keys and synth). Oh and what a night it was. I had an absolute blast, the music was great and the atmosphere was sublime. Sari made the whole night a real delight by creating a pleasant mood that rang throughout the venue. She seem like the kind of woman who loves a good night out and I think the St Helens audience created that for her. As the evening unfurled the music got better and everybody got more and more into the mood of the night.

Although there was no support act to talk about, it didn’t bother me too much. The format of the night was well paced and welcomed. So, in lieu of a support act, Sari performed two sets over the course of the evening and to be honest I liked this. It allowed Sari more breathing room and it offered the band a chance to really show off their skills as a unit. Let me tell you now, this band is an excellent functioning unit every single moment of the set was tight and really well produced. Every moment of the set was filled to the brim with a great groove and absolutely incredible solos from guitarist, Ash Wilson and keyboardist, Bob Fridzema. I instantly fell in love with the sound, the music filled my headspace and every instrument was so well balanced it was hard not to love every moment of the music. The setlist was really nicely mixed, filled with old and new material with some nicely performed covers to balance the whole thing out. Every song was performed well and it felt like the band was having fun with every moment of it. Also, as a nice addition to the night bluesman Ash Wilson performed his tune “Peace and Love”, which I loved. Seriously check this guy out, his music is amazing!

With all that being said, let’s talk about the star of the show, Sari Schorr and her performance was fascinating to watch. She had such a command of the audience and yet was so humbled by them at the same time. She was having a lot of fun on the stage, be that dancing to the music or the banter she shared with the crowd. It was a really nice performance to see. Her voice was simply outstanding, hitting every note with precision and flair. Her voice carried throughout the hall beautifully and I think everyone enjoyed the show, well I can’t speak for everyone but the general consensus seemed to be positive. Sari is an exceptional performer and for me she did an amazing job on the night. Songs like “Black Betty” and “Demolition Man” got amazing reactions, she was incredibly in sync with the band. In all honesty, the whole setlist got an amazing reaction regardless.

This was an awesome gig to kick off 2018 for me. Sari Schorr is an amazing performer and all of the musicians were an outstanding band as a unit. The gig was a fun yet relaxing night of blues and rock n roll. Hopefully an artist that I get to see live again in the future, sooner rather than later.