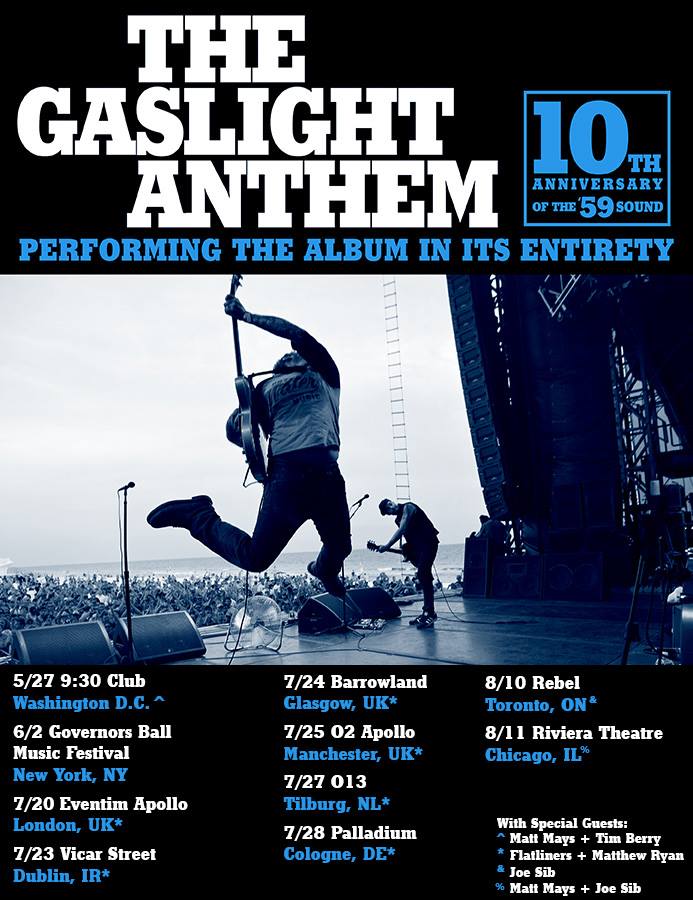 The Gaslight Anthem are one of those bands that have been with me since I was a teenager. So, when I heard they were reuniting to perform their breakout album, The '59 Sound, live in Manchester I knew I had to be there. It was one of those albums that helped me appreciate great songwriting. It was such a change in gear from their first album "Sink Or Swim" and helped solidify the style that the band would go with moving forward. This tour is the first time the band have performed together in quite some time. Even though they have reformed for this tour, I don't think we're going to be getting any new music from them any time soon. Now having attended the show, it feels very much like a one and done deal to celebrate the 10 Year Anniversary.

Opening the show was the alternative rock act, Matthew Ryan & The Northern Wires. It was a good performance, to say the least. For me, it evoked a very old school feel. The crunchy guitars and subtle bass really had that feel of The Replacements or Soul Asylum. I said to my friend at the time it felt like that kind of music you'd hear on a teen TV show during it's ending montage. It was clearly heartfelt music and it was performed very earnestly. The sweet guitar licks here and there added a lot of personality to music that would just have been a series of uninterrupted chord progressions. I liked the set and it was a decent opening to what would be a great night. Although, I felt that music was a little generic. It sounded like a bunch of other bands and artists that have done the same thing, but with a lot more energy and pep. If you're into your early 90's alternative rock there's definitely something here for you.

Next on stage was the singer-songwriter, Dave Hause, and oh my god, I was not expecting to enjoy this set so much. Performing on stage with his younger brother, Tim Hause, the pair electrified the crowd with a fantastic set, without the need of loud electric guitars and drums. Thanks to their clear fanbase the set went down a lot better, as there were a lot of people singing along and adding to that energy that the pair already brought to the stage. Dave is a fantastic showman, showing so much enthusiasm and hype he played his set and you couldn't help but get drawn in by his energy. Tim added a lot musically to the set, playing backing guitar, mandolin and piano, whilst Dave sang his heart out and played his acoustic guitar. It was genuinely captivating to watch. The songs had a lot of emotion put into them, there were definitely moments where I got goosebumps, particularly during the song "C'mon Kid". I have since been listening to Dave Hause a lot since the show and hope to see him again live sooner, rather than later.

I was ready for this set and I really liked how The Gaslight Anthem laid out the set overall. They opened on four tunes, not from The '59 Sound, and it made me so happy to hear. In order they were: the big single "Handwritten", fan favourite "Old Haunts", hidden album gem "The Spirit of Jazz" and the emotional and beautiful "Mae". I loved this opening part of the set. By not just jumping into it, they were able to get the crowd going and the night flowing without blowing the point of the night too early. For me personally, I loved this. Especially "Mae", which is my personal favourite Gaslight Anthem song. With everyone singing along it made it even more special. Right from the get-go, the crowd was excellent, jumping around and singing along to every song.

After a great intro, they got into the main meat of the set. Playing The '59 Sound in full. The first three songs "Great Expectations", the title track "The '59 Sound" and "Old White Lincoln" were all well done and the band played with vigour and intensity. Frontman, Brian Fallon is excellent, his voice was really clear and soars on top of the live production. As they played through the album the crowd got rowdier. The set was flying by and I was enjoying myself a lot, yet something occurred to me. They seemed to be blasting through this set and weren't taking much time to actually talk to the crowd. In fact, there didn't seem to be much interaction between the band members themselves. Each member was playing their part well enough, however, it didn't feel like there was a connection between them at all.

Instead of talking to the audience and creating more of a show, the band opted to play song after song after song without slowing down all that much. This actually got really exhausting after a little while as the band didn't allow for the crowd to catch their collective breath. It also didn't help that they played, The '59 Sound in the album order. As it didn't feel conducive to this style of performance. I would have liked it a little more if they had slowed down and talked a little bit about the album, as it's the 10 year anniversary and all.

They continued through the album hitting all of the fan favourites, "High Lonesome", "Even Cowgirls Get The Blues" and the ever sombre and gorgeous sounding "Here Looking At You, Kid". It was a fantastic experience to hear this whole album in full. Hearing the passion that so many people have for it collectively in one glorious night. Wrapping up the set, they played some more fan favourites from over the years, and some songs I really wasn't expecting. The crowd came alive when they played their massive hit "45" and it was an emotional feeling to sing "National Anthem" with a crowd this size, especially since that was a B-side from the Handwritten album. Ending the show on a high with the ever-popular, "American Slang". Which got a huge ovation as everyone sang alone.  Even, Dave Hause came back onto the stage to perform it with them. Which was cool to watch.

Overall, this was a great night. The Gaslight Anthem continue to be one of my favourite bands. Although they have said they're not working on new material right now, I still hope for a return in the future. As this show certainly proves they can still sell a big show. As much as I wanted to like everything, I still would have like more crowd interaction as well as more interaction between the members themselves. I can still count my lucky stars that I was able to be in attendance and I had a great time. The crowd really were excellent here as well, creating an amazing atmosphere and made it an unforgettable night.