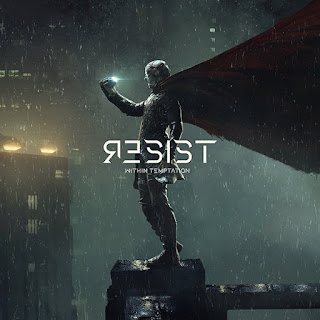 Since I was fourteen years old I have adored the band, Within Temptation. The band has been with me for years and I have always thought highly of them. The fans of this band have been mixed on their recent output, yet I think we can all agree that we can all agree that The Unforgiving was certainly a turning point for the band. Everything from Mother Earth to The Heart of Everything, the band firmly fit into the symphonic metal sub-genre. The Unforgiving was a very different album for the band, with less focus being put on the 'symphonic' aspect of their metal music and pushing right on with a different form of, rock sound. They were critically praised and the fans were willing to take their hand on this different sound and the majority were pretty happy with the end result. Then the band released Hydra, this album was critically praised but the core audience was less than impressed. I think the overabundance of feature guests and the lacking symphonic sound really annoyed a lot of fans.

Now I really liked, Hydra as an album. I liked the idea that the majority of the songs were attempting to cover a different subset of the rock and metal genres and it really showed how dynamic the band were attempting to be. The execution was a little but I liked the core idea behind it and I still think the songwriting was pretty strong. So, I was interested in the idea of the new album following up with what they did on Hydra and The Unforgiving. Continuing the sounds, themes and songwriting structures whilst attempting to bring in the new ideas and lyrical content. I think people might have been scared off from this album right from the get-go with the first two singles being released having feature guests on the tracks, also the band heavily leaning towards a more commercial metal sound that felt less unique to Within Temptation as a band.

I decided to let Resist sit for a bit rather than judging it off of the first listen alone. I mean, I spent that little extra money and bought the collectors boxset so, I wanted to make the most of my purchase. I will say that this album is pretty good. Is it the most mind-bending musical ever written, no. Yet, it's still a solid record. There are lots of great moments that really make this feel like a Within Temptation album of old, whilst still maintaining this new current course they are sailing. The production is a bit messy, I won't lie. Sound songs sound really polished and wonderful, like "Raise Your Banner" and "Mad World" other are just odd, like "Firelight" in which I don't understand how the song was put together in the mix. I will say this album has is scale. I mean the production feels huge with booming bass parts and the guitars have girth. The rhythm section feels tight and the album as a whole is pretty well paced. The second the choruses come in from either the verse or pre-chorus, it really just hits hard. Those moments of tension and release make the songs feel epic and grandiose. Especially on songs like "The Reckoning" and "Supernova".

Something that leaps out at me is the over-use of electronic production techniques that litter the album, giving a very artificial vibe to it. I blame this really on two things... The synth tones they've used and the overarching theme of the record. It's clear they've gone for a sci-fi theme on this record, almost video game-like. As such, they have tried a synth tone to complement that theme and it doesn't really mesh well with the Within Temptation style of songwriting. I could see this sound working for say Rob Zombie or Marilyn Manson as industrial and goth metal, calls for it in a way. Within Temptation, however, don't really fit that mould so the tone doesn't work. Does this make the record bad? Well, not for me. It's more interesting to see them trying out something different.

Resist is a decent enough record from them. Maybe it isn't the most masterful or gracious of albums but the songs are still enjoyable to me. I love how the band has changed so much over the years yet still adhere to their core sound that was forged in the early days. You may disagree and think this album is bad, disappointing and not indicative of their sound. Maybe you think the other way and think this is a five-star classic that should be adorned. For me, I'm pretty much in the middle. I think it's enjoyable and I like listening to it. Some of the songs are really catchy and fun and others have the massive and powerful quality that I like hearing in Within Temptation. If you like interesting lyrical language set to decently produced music, then you'll like this fine. I look forward to seeing them live when they tour with this record so I can hear these songs in a new way that might be even better than the record and I will continue to follow this band in their future endeavours.

Angela said…
���� I like the album, plus the band is being given more exposure in the media and on major radio stations and hitting the charts ☺️
11 February 2019 at 08:17