Interview with Danny and Martin of Skarlett Riot 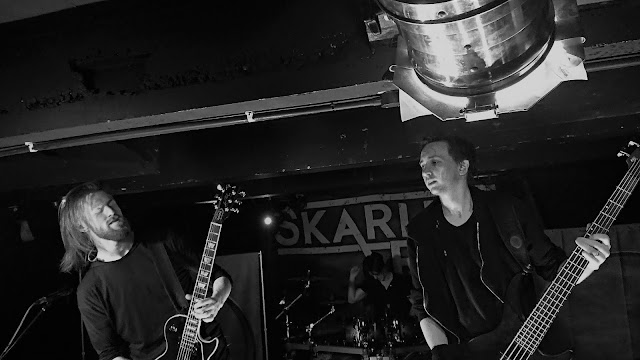 Before their set at The Flapper in Birmingham, I have a chat with Danny Oglesby and Martin Shepherd of Skarlett Riot to talk about life on the road, upcoming work from the band and the connection they share with their fans.

Tonight your playing in Birmingham and now about halfway through the UK tour. How's the tour been going so far?

Danny: Yeah, really great! We've done Edinburgh, Newcastle, London, and Manchester and it's just been all incredible. In all honesty, we didn't expect such a good response.

I think it's fair to say that you have a dedicated fanbase that will get to every show you do. Is it comforting to see familiar faces at shows amongst the new fans?

Martin: Yeah, it's great seeing new people at shows because that means we're growing. However, seeing the familiar faces does bring a sense of comfort that they've been before, clearly enjoyed themselves and they want to come again. I mean, there are people that we've seen at all four shows so far, now that's awesome.

It's cool to hear of that kind of commitment. What do you personally think it is about your music that resonates with people that strongly?

Danny: I'd like to think that they connect with the message in the music. I mean, we obviously have a strong emotional connection to the songs but people can interpret it how they want and I think that's what they love about the music. Well, that's what I hope anyway.

How do you guys spend your downtime on tour, you know, if you get any?

Martin: I mean, yesterday we walked around Windsor! So, that was something. I mean sightseeing is just a great way to relax. We don't want to go off and do anything crazy!

Danny: Exactly. We like to chill between shows, so, we do like our downtime when we get it.

What do you think is the most important thing about playing live?

Danny: Just enjoying it and seeing everyone else enjoying themselves. You for us this is a bit of escapism and I hope other people see it that way too. You know, you turn up to a rock show and just forget about the world outside and just enjoy yourself for a few hours.

Martin: To be fair if the band isn't enjoying their time on stage, people will tell and they won't come back. So you might as well make the most of it.

Are there any bands that you want to recommend and don’t get much attention?

Danny: Well that was one of the things we thought about when putting this tour together. It's one of the things we discussed. So, the bands we got on this bill Sertraline, Sister Shotgun and Fahran. We've known them for a long time and we're now in a position where we can give a helping hand to the people that have been there for us in the past.

I mean there are lists of bands that you could rattle off. At the end of the day though, it's about getting out to a venue and just seeing a band, even if you don't know who they are. There's a lot for good music out there and enjoyment comes in finding that new sound.


Well, one of the things that I'm starting to dislike is when people only show up for the headliner.

Danny: That's been the beauty of this tour. Right from the first night, the shows have been packed with people who are really up for a good night. Manchester, in particular, was rammed with people right from the opener and they stayed through to the end. Which is awesome to see.


Is there anything that you dislike about touring?

Martin: Well, we have to spend more time with Luke...

Danny: Yeah, that's a bit shit ain't it! No, in all seriousness, there isn't. At the end of the day, it's escapism for us. Getting to see new places and meet new people... I don't think there's a bad point. It costs a lot but worth it in the end.


Is there anywhere you would like to tour that you haven't been to yet?

Danny: Everywhere! We would love to get out to the USA, that would be huge for us. Also, Japan would be cool. I mean we were lucky enough to get out around Europe with Butcher Babies and Kobra and the Lotus. That was an awesome tour and the bands were so good to us.

So, what's now in the pipeline for Skarlett Riot now?

Danny: Yeah, we'll finish this tour and we'll have a few things to announce over the summer, festivals and the like. Then, I think we'll start planning for the third album. You know, Regenerate came out about a year and a half ago now, so I think the time is right to get a third album in the works.

What's the one thing you hope to accomplish as Skarlett Riot?

Danny: Ever since I went to my first concert and decided that I wanted to be in a band, my personal goal has always been to make it to the arena level. I mean, I went to see Def Leppard at Sheffield Arena and I thought to myself, "I want to be there...". For me, that's what I've always been aiming for.

Martin: It's the case of building on what you've already done and then, keep on going. The worst mistake you can make is to just stay at the same level, you've just got to keep going. You've got keep building yourself up.

Danny: Exactly, I want to influence the person who was sitting where I was, watching Def Leppard. You know inspire someone to go and make their own music.

Danny: I mean it's not my favourite song, even though I do love it. It would have to be "Pour Some Sugar On Me" by Def Leppard.


Finally, what is the hardest thing you have had to overcome and how did you overcome it?

Danny: I mean we've been through a lot! A lot of changes: members, agents, managers. Though, that's the nature of the beast. Eventually, you do work your way through it.

Martin: I think, it's learning to take on any negative and not letting it drag you down. It's either something to build on, or it's just another lesson learned.