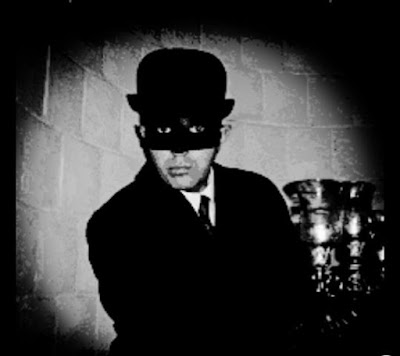 I grew up in a musical household. Music is in my veins. My dad was in a band before I was born, (how he met my mom) and continued until I was in high school. I was exposed to all sorts of music. When I was a child in a crib I would sing the latest song that was playing on the radio apparently. (probably never got the lyrics right though…hahahahahaha) I loved Elvis as a kid and still like Elvis to this day. (early Elvis…not big on the Vegas years)


What can we expect from you in the live world going forward?

“At present, Gnostic Gorilla is unable to do live shows. However, I would love to do a one-off someday with a decent band to back me up. My vision of such a gig would be something theatrical (within our means obviously) and emphasis on mystery. I would love to close with a cover like “Dead Cats, Dead Rats/Break on Through” by the Doors because it’s quite passionate and I think it would be a lot of fun. But for now, they won’t let me out on day pass...hahahahaha. (Just kidding) In the end, it’s NOT impossible, but it’s not planned for now...as much as it would be cool. Touring would definitely be out of the question because I wouldn’t be able to find someone to feed the squirrels....hahahahaha.


Who are your biggest influences?
So many bands/artists that I admire and like—Gary Numan, Type O Negative, Japan (David Sylvian) KISS, Sabbath, Korn, M. Manson, Nash the Slash and the list is endless. But the bands that most influence me in my own approach to recording are Ministry, Skinny Puppy, Bauahus, Rammstein, and many Gothic/Industrial acts. I also have a HUGE love for The Doors. In fact, I’d say, they rank in the top 5 of my all time favourite bands.

What is the one song you had wished you had written?

“When the Music’s Over” by The Doors. Classic song.

Are we talking about music here or life in general? I’d say regarding the question of pursuing music, as soon as you do it for any other reason than to just truly and honestly express yourself in a creative way, you’ll lose unless you’re a Barbie or Ken doll, then it’s not even the music that counts. Hahahahaha About life? The older I get the more I realise I know amazingly very little.

Fear Incorporated are an amazing band who also happen to have a new release out called “Apparitions”. Quite cool.

If there is one thing you would like to achieve in your career, what would it be?

Well, having a tiny little niche in the underground scene would be cool but even that may be aiming too high. You know, I believe in believing on yourself so to speak but I also believe in being real. There are next to no new legends being hatched in this industry, not because the talent isn’t there but because it’s all been done. It’s hard to break new ground today because it’s all been done and there are THOUSANDS of artists out there releasing their music in cyberspace as indies and you feel like a snowflake in a blizzard. So, I am happy that I was offered a label deal with Cleopatra Records and also KL Dark Records and Nowhere Now Records but I won’t be a guest on the “Old Grey Whistle Test”. hahahahaha

At this time, Gnostic Gorilla is not doing any live shows.

Used to be into fishing but I haven’t in a long time. I love reading, and I also love exploring different cultures. Watching grass grow is lots of fun as well. Hahahahahaha (just being a goof here)

Hmmmmm. Addiction. And there is NO CURE. One learns to live clean and sober, that’s the deal with this disease. One drink and you’re off on a crazy train and it isn’t with that lovely Randy Rhodes guitar intro either. I go to AA. Regularly. I’m still nuts but I learned to live with my insanity. hahahahahahaha