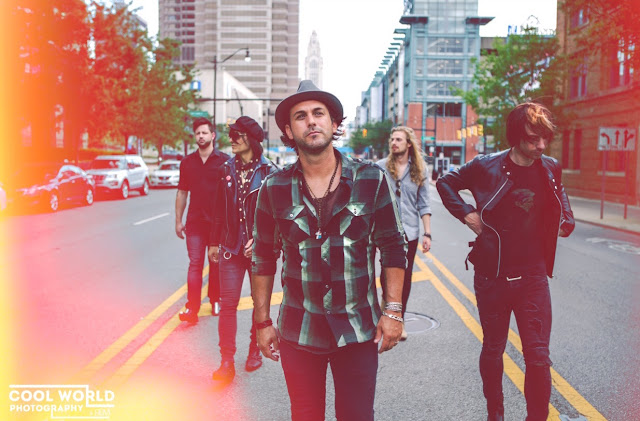 David(Guitarist): Music is something that had always spoken to me from a young age. I was & still am obsessed with it. Hearing my mom play Aerosmith, Led Zeppelin, Sex Pistols & Jimi Hendrix forever changed me.

Troy (singer): Passion alone came from both my parents, but music specifically would probably be more my mom and my brother who had a guitar.

David: Aerosmith, Led Zeppelin & The Rolling Stones probably. They are older bands around before my time but their music is timeless & have some of the best riffs!

Troy: Growing up my parents played a ton of Mellencamp and Billy Joel so the storytelling type of songwriting stuck with me...of course, as I got older I needed louder guitars and a little more anger!


To you, what is the most important thing about playing live?

Troy: Leaving it all on the stage. The people that showed up could have been anywhere and they chose to be there. Most worked their asses off all week and want some entertainment...give it to them and be grateful.

David: Man that’s hard... maybe “Rocks Off” by the Stones or “Draw The Line” by Aerosmith. Both songs have so much swagger!

Troy: At this point, anything by Queen. They just knew how to write anthems and currently, I’m sure there are some pretty big royalties being paid! Haha

David: Never give up on something you can’t go a day without thinking about.

Troy: Gratitude and Empathy...put good out to the world.

David: A band that deserves more attention hmm maybe The Wildhearts. They are just wicked. Not a lot of people in the U.S. know about them & it’s a shame.


If there is one thing you would like to achieve in your career, what would it be?

Troy: As simple as it sounds...a hit song. Only because if you have a “hit” then you have impacted more people than most with your music...again, I don't need it, but the question kinda made me think of a “dream scenario” haha.

David: I honestly don’t hate any of it. Even on the worst day, you’re still making & playing music. To me, that's the dream so everything that comes with it I’m ok with it.

Troy: Touring...just the monotony. Music industry...same as the rest of the corporate world...the games and politics.

David: I’m a workaholic. It’s hard for me to take time off or turn my mind off. So I learned that working out helps me clear my mind & not think.

Troy: Honestly the hardest thing to overcome was that I was lucky enough to have a record deal early on, and then watch the album pretty much get shelved ...while there was considerable fallout emotionally, I was able to pull myself from depression by asking for help, good friends and a bit of therapy. Depression is absolutely real, and there is no shame in asking for help.