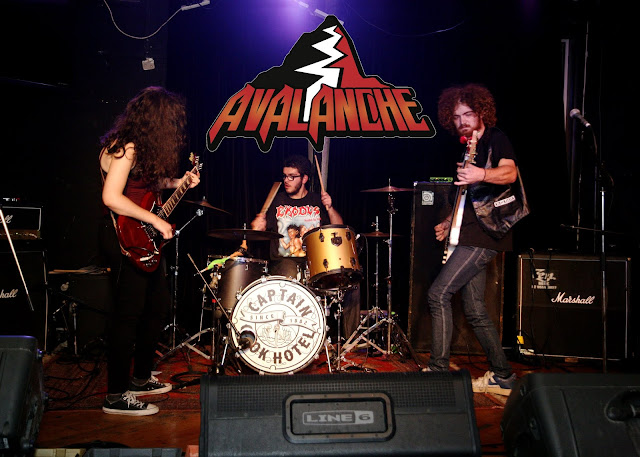 Steven Campbell (lead vocals, bass): Most likely my dad, he used to sing in rock bands back in the ’70s and ’80s, so I was surrounded by the music from when I was a little kid.

Veronica 'V' Taleski (lead guitar): I have no idea, no one I knew played anything, maybe listening to some of my dad's old rock and metal CDs got me into that kind of music over what was playing on the radio. He bought a guitar for my brother and he never touched it so I started playing around with it but wasn't too into it. I think it was after I discovered AC/DC and saw them live that I decided that I wanted to be a musician.

Arthur Divis (rhythm guitar): Not too sure, I think it might have been that as a kid Mum and dad always used to play music around the house and eventually I got a guitar and that was it.

Steven: I think at the moment I’ve been really influenced by a lot of the early hard rock and pub rock bands, especially here in Australia, but with a big influence also coming from heavy and doom metal. I’ve always loved heavy music whether it be fast or slow but I think there are elements to both of them that can be used in our situation and that’s where most of my music influence tends to come from.

Veronica: Definitely AC/DC and the Young brothers, I also really like Paul Kossoff from Free, as well as Keith Richards, Chuck Berry, Jim McCarty from Cactus, Johnny Winter, and a lot of blues artists as well, like Robert Johnson, Muddy, BB, The Bluesbreakers and too many more to name.

Ryan: I got a lot of influences, Phil Rudd is the big one for drumming, but in terms of bands I love Metallica, Motörhead, Judas Priest, Iron Maiden, Slayer etc.

Arthur: My influences would be Gunners, AC/DC, Metallica, the usual.


To you, what is the most important thing about playing live?

Steven: I feel like the most important thing is having fun, we have to make sure we’re all very tight and together on stage but at the end of the day having a good time is what it’s all about and I like to think that when we’re having a good time on stage everyone watching us will be more obliged to as well.

Veronica: Putting on a good show. Of course, playing the right notes is a big part of it, but if you've put in the practice then all you should be thinking about is giving the most memorable show ever.

Arthur: Even if you stuff up, keep playing!!

Veronica: You Shook Me All Night Long or The Jack.

Ryan: Probably Let There Be Rock.

Steven: I think the biggest lesson would have to be taking care of yourself, you can only do as good as your body will let you and you need to be healthy and fit to put on the best show I feel.

Ryan: Don’t get lazy with practice, be productive.

Steven: There’s a great band we played with recently called Molly and the Krells and they have honestly got such a great sound they definitely deserve any credit they get.

Veronica: It’s not like they don't get any attention, but Airbourne is just fucking awesome.

Ryan: At this point in time I been listening to a lot to Hockey Dad.

Arthur: Just played a gig with Molly and the Krells, would recommend they sounded so tight


If there is one thing you would like to achieve in your career, what would it be?

Steven: To be able to play music without having to go to another job I think is the ultimate achievement. To be able to just focus on what I put into my music and my instrument, out of anything I think that would be the biggest achievement for me.

Veronica: I just want to play the guitar well. After I saw AC/DC live when I was 16, I thought if I could learn to play half as good as Angus and Malcolm then I would've accomplished something in my life, and of course, it would be nice to get recognised for it too.

Ryan: I just want to get tighter with my playing.

Arthur: To play to shit tons of people.

Steven: I think the worst thing would probably be that it’s the only job that everyone seems to have input for, no matter who they are, sometimes can get you into some funny situations.

Veronica: The pay. But if everyone did it for the pay then no one would do it.

Ryan: Lugging your drums around man, just a pain in the ass.

Arthur: The lack of commitment and motivation of people who supposedly ‘love music’ to come to live shows.

Steven: I used to spend a lot of time reading and writing but after a certain age it just slowed down and I don’t do it as much anymore but I’d say that’s the only other thing I spent quite a lot time trying to learn.

Veronica: I don't think I have any haha. I literally do nothing else. I can't even watch a movie all the way through without picking up a guitar at some point.

Arthur: I’m into architecture quite a bit actually.

Steven: Just sticking to a steady schedule for everything I tend to let time get the best of me a lot and it’s something I’ve had to work on a lot but I feel like once you start changing the way you think about certain things, such as a routine, it does become easier.

Veronica: I think going from playing by yourself in your bedroom to rehearsals with other musicians, to live in front of heaps of people was a bit of a challenge at first, but I'm getting the hang of it, you just can't be afraid of fucking up or waste time thinking you're not good enough.

Ryan: Getting over the anxiety of playing live and not feeling confident, I guess the only cure is to focus on what a good time you're having instead.

Arthur: I think just playing live and with other people compared to playing by yourself was a challenge. Struggled a bit at first and was clumsy, but keep practising and it slowly gets better.