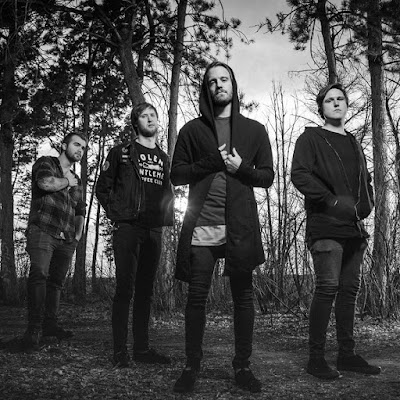 My passion really came from my dad and how much he just listened to music all the time. No one in my family was really musical but from an early age, I was just always running around singing along to whatever my dad was listening to, being a lot of Tool, Van Halen, and Pearl Jam ha. As I grew older, I just always wanted to be in a band and create art.

Who are your biggest influences?

My biggest influence is hands down Spencer Chamberlin of Underoath. Never really being formally trained I mimicked Underoath screaming and singing along to their albums.

I think just the energy that comes with it. You’re up there performing your art and especially with us we just have so much energy. That vibe is just there, and you feel free, it’s that feeling we chase and settle for being a broke band dude for it.

Man, that is such a tough question. In all honesty, I wish I had written “You Had Your Chance” by In Fear and Faith. That song is just so pure, and Scott Barnes has so much emotion in every note he ever wrote. It’s a beautiful song.

Trust your gut and surround yourself with like-minded individuals. I’ve been a part of failing bands, somewhat successful bands, now this band. It really comes down to just surrounding yourself with the right team of dudes that have the same goal in mind and know the amount of work it takes to get there.

Are there any bands/artists that you recommend that don’t much attention?

Absolutely check out a band called Fox Lake. They have such an awesome sound and have just the most organically pure talent.
If there is one thing you would like to achieve in your career, what would it be?
Well, it was to play Warped Tour until it’s ending. I think I just want to continue to create music and art and never lose the drive I have in my heart for music. Music is therapeutic for me and being able to connect with so many people throughout the years that I never would have if it wasn’t for music.

What’s the one thing you hate about touring and the music industry in general?

How jaded I am now haha. I think the only thing I dislike is how the majority are kind of just in it for themselves and looking at how to put money in just their pocket. I would have to say that and people who have jobs that they essentially don’t know what they’re doing or just don’t even do their job but feel entitled to get respect.

Golf for sure. It is literally the only thing I do that isn't working or music-related.

What is the hardest thing you have had to overcome and how did you overcome it?

Just dealing with the failures of past projects has been the hardest thing. Having people tell you that you’re not good enough to do this just fuels my fire more and drives me to be better and prove them wrong.